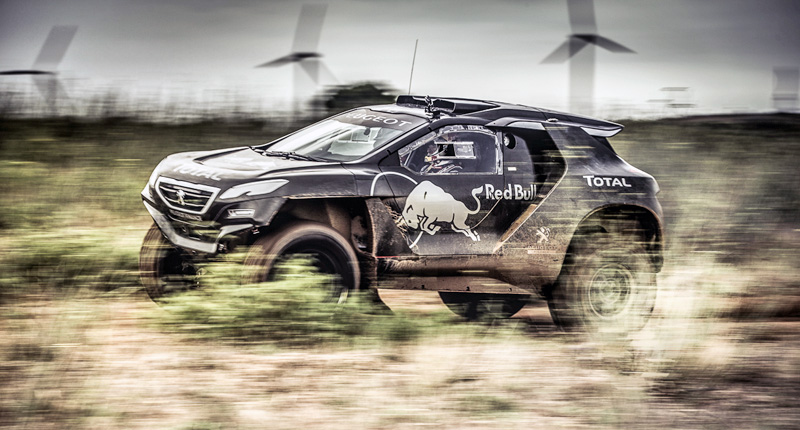 The Peugeot 2008 DKR has plenty resting on its hulking shoulders. Yes, this highly modified off-roader has been developed specifically for the French automaker’s return to the gruelling Dakar Rally after an absence of some 25 years.

And it’s a mean-looking thing, isn’t it?

But is anyone really expecting the plucky Pug to have any hope of ending MINI’s recent domination of the famous endurance race?

Well, despite Peugeot’s undoubted rally raid pedigree — the manufacturer claimed four consecutive Dakar wins from 1987 to 1990 with the Peugeot 205 T16 and Peugeot 405 T16 — it’d be nothing short of foolish to head into the sandy battle simply expecting victory.

Thing is, the MINI X-Raid team and other top competitors would do well not to underestimate the V6-powered 2008 DKR. Why? Well, it has three distinct tricks up its bulging sleeveâ€¦

Your eyes do not deceive you. The deceptively compact Peugeot 2008 DKR will be employing a rear-wheel drive setup to tackle the sort of treacherous terrain that’d make Bear Grylls assume the foetal position and quietly cry himself to sleep. Madness, you say? How can you take on 9200km of desert and salt flats without four-wheel drive, you ask? Well, while it may seem like pure folly, there is method behind the madness — even if the combination of two-wheel drive and a diesel powerplant has never seen victory in the Dakar. Yes, the race rules effectively lend two-wheel drive entrants certain advantages to compensate for the inherent “upper hand” held by all-wheel drive vehicles.

This means that (as a two-wheel drive entrant), the 2008 DKR will be allowed to run significantly lighter than its 4×4 brethren, employ bigger wheels and boast a shorter front overhang, too. It will also feature longer suspension travel (at 460mm as opposed to just 250mm) and a system that allows tyre pressures to be adjusted from inside the cockpit â€“ the latter being particularly useful when entering or exiting a set of nasty dunes.

2. It will be driven by a trio of Dakar legends Peugeot has managed to acquire the driving services of three blokes who know a thing or two about the world’s toughest off-road endurance battle. And each one is a legend in his own right.

First up is Stephane Peterhansel, who is the most successful competitor in the history of the Dakar Rally, having made his debut way back in 1988 in the motorcycle category. The Frenchman has won the event a record eleven times, claiming his latest victory in a MINI Countryman in 2013. During recent testing, Peterhansel revealed that the 2008 DKR feels â€œa bit livelier [than all-wheel drive machines] and as such, demands a defter and more precise touchâ€. And who better to provide that deft touch?

Carlos Sainz, meanwhile, brings a wealth of experience to the star-studded team. The 52-year-old Spaniard is a former world rally champion and, of course, claimed Dakar glory with Volkswagen back in 2010. And the third driver? None other than Cyril Despres, who has fought his way to the top of the Dakar podium five times, albeit in the motorcycle category. But that needn’t be a hindrance, with teammate Peterhansel proving that it’s entirely possible to successfully make the switch from two wheels to four.

3. It was developed in-house by Peugeot Sport No, that doesn’t mean it pilfers all sorts of bits and bobs from the rather soft mini-crossover with which it shares part of its name — in fact, the two vehicles couldn’t be more different if they tried. Instead, it means the 2008 DKR was designed, engineered and built by the very same team behind the record-breaking Peugeot 208 T16 Pikes Peak. And the Le Mans-winning Peugeot 908 prototype. And even the Peugeot 206 WRC and Peugeot 307 WRC of the early and mid-2000s.

And that motorsport expertise will no doubt have come in handy. The 208 T16, for example, shattered the Pikes Peak International Hill Climb record at the hands of a certain Sebastien Loeb. It’s an absolute technical marvel, powered by a 3.2-litre mid-rear-mounted V6 bi-turbo engine. That means it’s good for a zero to 100km/h sprint of just 1.8 seconds! Sure, the T16 is an entirely different animal to the 2008 DKR, but it shows what the Peugeot Sport team is capable of creating.

The mid-rear-mounted V6 twin-turbo diesel engine bolted into Peugeot’s Dakar contender isn’t a bad effort itself. The 2993cc mill makes around 250kW and 800Nm, all of which is sent to the rear wheels via a six-speed manual sequential gearbox. It also boasts a 400-litre fuel tank and allows the 1280kg vehicle to hit a top speed of 200km/h.

But is it really capable of winning the event? Look, the 2008 DKR is a pretty hefty technical gamble from the folks at Peugeot. But it’s also a calculated one. And the French automaker has developed a fascinating habit of adopting a totally different strategy to its main motorsport competitors â€“ and often coming out on top.

It’s a bit of a tough ask to win the Dakar Rally with an essentially unproven setup at first stab. But, come January 2015, don’t be too surprised if this innovative beast does more than just ruffle a few feathers! 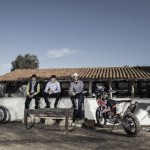