Wrath of the White What?

It’s a mouthful… but Ni no Kuni: Wrath of the White Witch is an upcoming JRPG PS3-exclusive title from Level-5 and legendary Anime creator Studio Ghibli.

When you hear that the maker of Spirited Away (2001), the most successful Japanese film in history, is working on something new — especially unchartered territory like a game — you have to get excited.

The big question is, can its signature style of childhood fables translate well into a game? With just under a month ‘til it drops onto our shores, we look at how Ni no Kuni is shaping up.

A tale of loss

The story follows Oliver, a thirteen-year-old boy whose mother dies saving him from drowning. Guilt-ridden, Oliver cries onto his doll Drippy, magically bringing it to life. Together they travel to Ni no Kuni, a parallel world, where Oliver seeks a way to bring his mother back to life. In a game where childhood loss is a core theme, the world design is important… this is Oliver’s imagination after all. Characters, creatures, mountains, cities, caves and forests are both physical and thematic parallels to Oliver’s real world. Thankfully they’re all brought to life in vibrant cel-shaded graphics.

The result is that you don’t feel like you’re in a video game, but rather your own Anime movie.

A short playable demo available on PSN, despite its limitations, gives a good indication as to the style and quality of the principal game mechanics… battle and exploration.

One scenario in the demo puts you into a stunning forest setting, tree-monster boss and all. Void of any tutorial, figuring out the battle system is a touch harder than it perhaps should be. However its familiar stuff for anyone who’s played a game like Final Fantasy.

You give commands via a menu system in real-time, but unlike Final Fantasy you also control the character; physically dodging attacks and getting into position to strike your enemy’s weak points. Your party of up to three characters carries familiars which are essentially the same thing as Pokemon — little creatures with unique abilities that bend to your every will. Each character can hold three familiars apiece.

There are no limitations on movement, you can run and dodge to your heart’s content. Attacks and spells have a slight recharge period but the battles have a quick pace to them, accompanied by an epic orchestral soundtrack.

The DEFEND command is vital to success, timing it right not only drastically reduces the damage you take, but also builds up your ultimate attack.

Enemies drop orbs as your strike them, green for health, blue for mana. But if things are repeatedly timed right, they’ll eventually drop a gold orb. Collect this and unleash your ultimate, snazzy cutscene and all.

There is a levelling system, but the demo doesn’t show it off. All in all, the battle system is fairly interesting and easy to learn.

The World Map is drop dead gorgeous, it screams of nostalgia to the days of early Final Fantasy and Chrono Trigger. The cel-shaded graphics excel showcasing the undulating landscape and moving clouds. I can’t wait to get into a city.

One annoying design choice is that you often get attacked by lesser creatures walking around. With it almost being impossible to avoid them, expect countless battles from piss-easy creatures that give you a comically low amount of gold and experience

So what to make of Ni no Kuni?

The story is a childhood parable, and despite being touching, I’m not sure how engrossing it’s going to be for anyone over the age of 12. After all you do collect parts of the ‘heart’ such as ‘enthusiasm’.

The battle system is adequately interesting, and the use of familiars is a blast to days gone by in RPG history. I’ll let my inner sceptic free until I see how levelling up and abilities work.

If you like Studio Ghibli though, that might not matter at all. The opportunity to be placed inside one of their worlds is enticing, no matter how innocent that world might be. And it doesn’t hurt that this world is gobsmackingly good-looking either.

So here’s hoping that Ni no Kuni is more than just a nostalgic journey, and one actually worth taking. January 22 will reveal all. 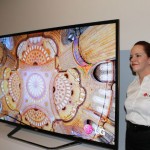