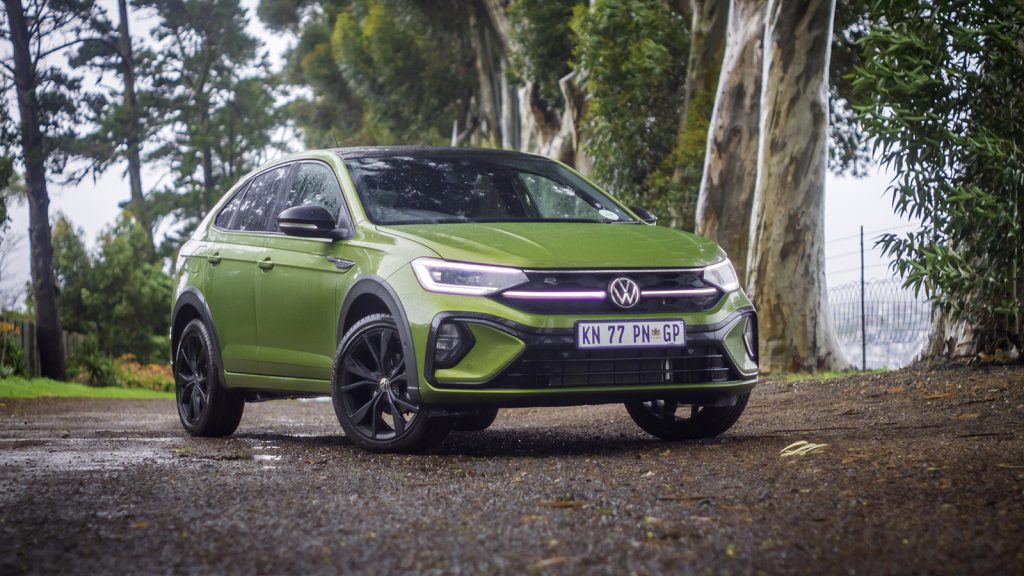 Taigo is the sixth VW SUV or crossover to join the German brand local product portfolio. It has been a remarkably astute reconfiguring of its product portfolio, for a company that is synonymous with hatchbacks and sedans.

Built on the same platform as Polo and T-Cross, the Taigo is a lower and longer version of the latter. That means you sacrifice some sense of cabin airiness for a stylish exterior appearance.

The design is a VW variation on the sloping roofline SUV idea, initially done by BMW with its first-generation X6. And copied by all other German product planners. In profile, any sloping roofline SUV or crossover looks terrifically sleek, but they all suffer the same issues in practice. 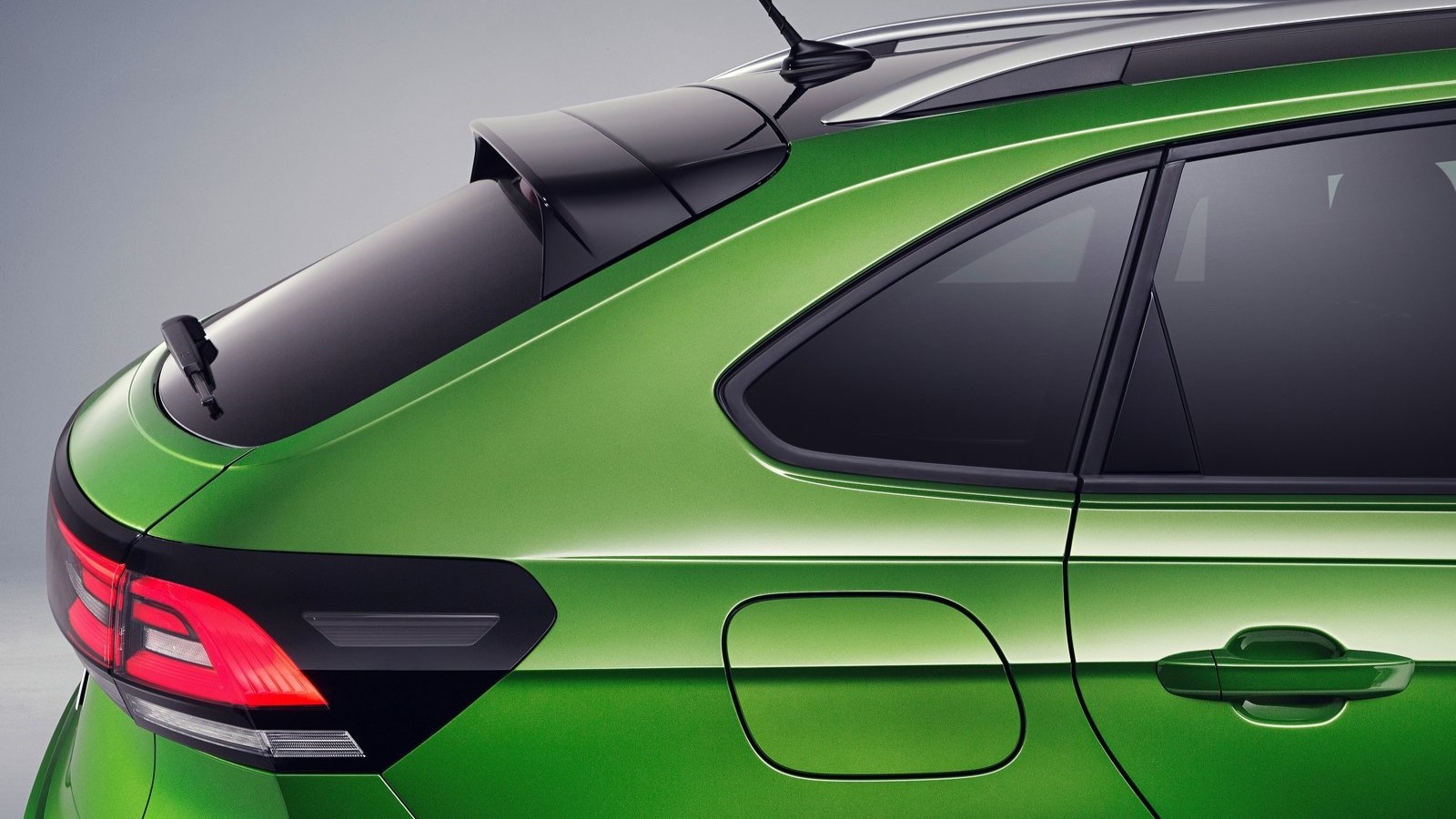 The problem with that sloping tailgate

That dramatically angled tailgate reduces luggage space, impedes rearward visibility and adds a sense of light claustrophobia for tall passengers in the second-row seating. Designers will tell you that the rearward visibility issue has been overcome with technology, thanks to rearward-facing cameras, and that is not untrue.

How much utility space do you lose in the rear, choosing Taigo over T-Cross? It calculates to 15-litres, with VW’s sloping roofline compact crossover having a luggage capacity of 440-litres, compared to T-Cross, at 455-litres. That might not sound like much, but the raked angle of that tailgate glass can be the issue. 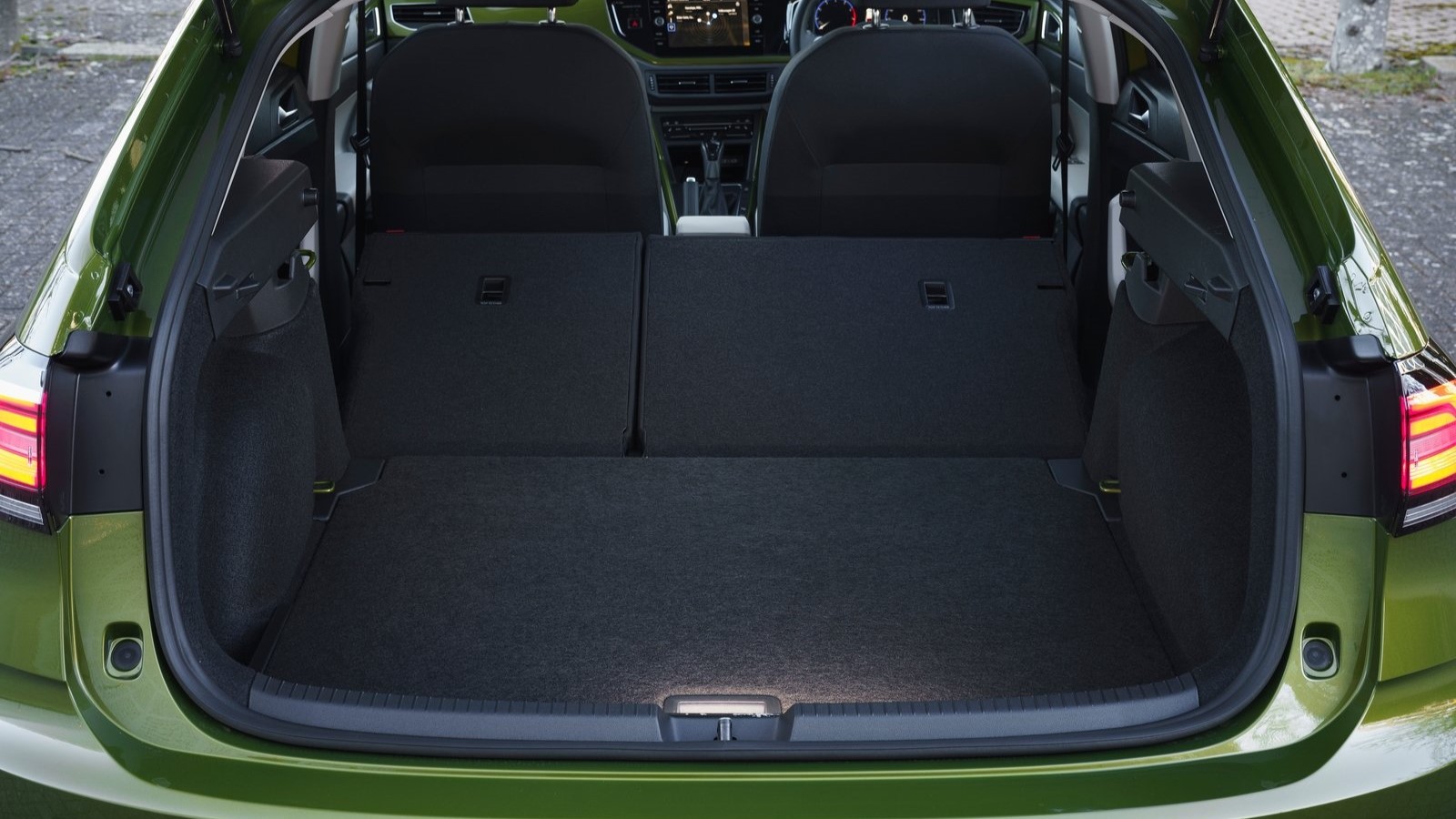 The art of packing carefully

Despite Taigo being longer than T-Cross, the luggage limitations remain real. In theory, the T-Cross has only 385-litres of luggage space, but it has a function to slide the rear seats forward, increasing luggage capacity to the 455-litres we’ve mentioned.

If you are packing for a weekend away and rushing to get out of town before Friday afternoon traffic crushes your ambitions, one must be careful not to slam the tailgate shut. In the hope of compressing your luggage into place.

A weakness of these sloping roofline and raked tailgate crossover designs is that the shape of the fifth door’s glass. It is vulnerable to scratch and cracking damage if you have sharp-edged objects in the luggage area and slam close the tailgate. 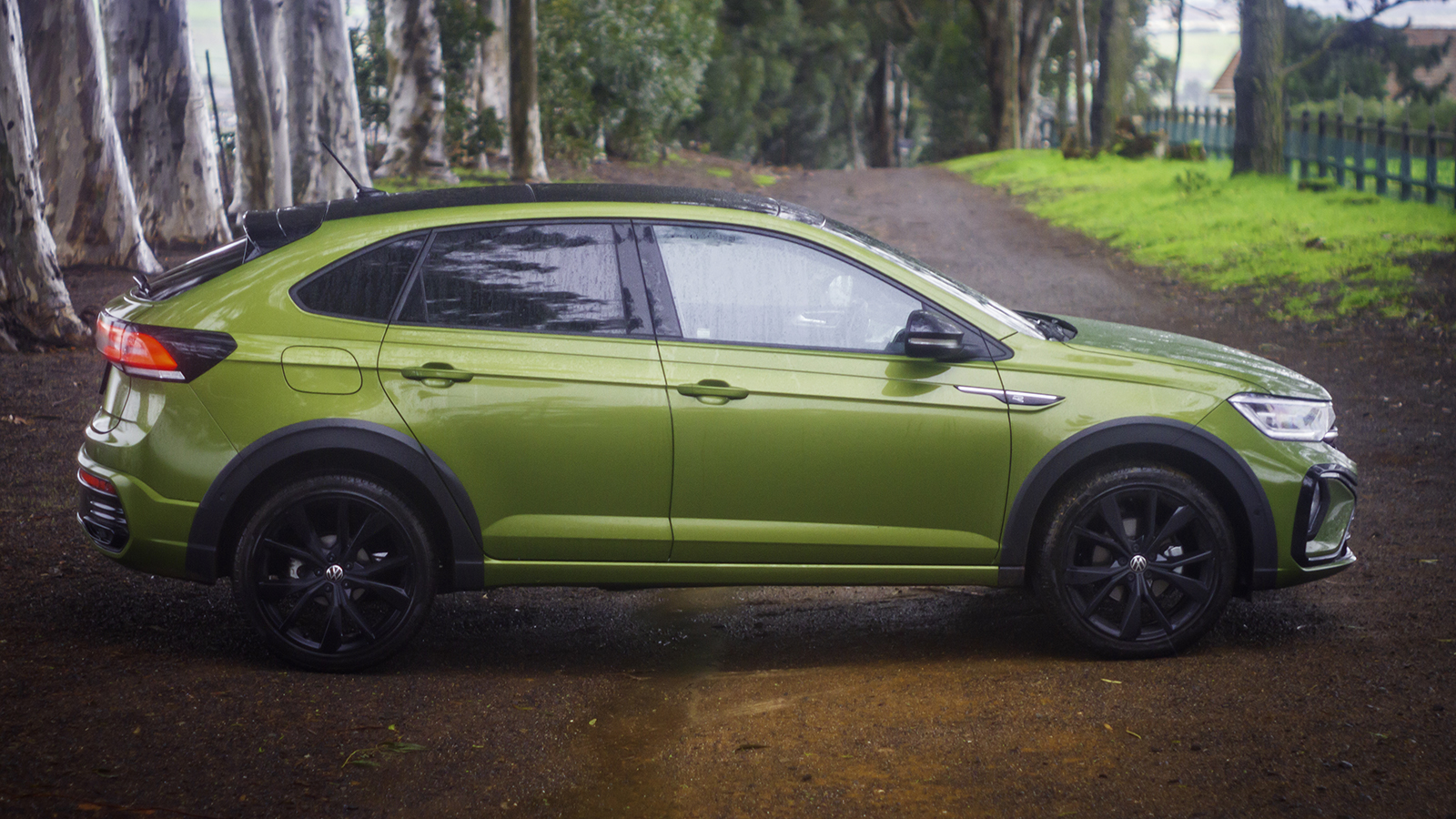 An electrically operated tailgate can mitigate this risk, with its object sensors and intelligent closing. But Taigo’s tailgate is manually operated, conferring all the responsibility and risk of slamming it shut onto a sharp-edged object in the loadbay, onto the human operating that tailgate.

As a cohesive design, the Taigo 1.0 TSI R-Line looks great. That pseudo-coupe silhouette is enhanced by Taigo being much longer than its T-Cross twin. VW has some terrific colours available too, such as our test unit’s green hue.

Inside it is standard VW compact car fare, with the company’s reasonably slick digitisation and device integration. Seats are fabric and reasonably comfy, although taller passengers in the rear will experience the nearness of that tapering roofline, above their heads.

As a driving experience, Taigo 1.0 TSI R-Line benefits from the immense overengineering that VW has applied to its compact car platforms. Few rivals feature similar noise and vibration insulation. Ride quality depends on wheel choice, and if you opt for the 18-inch Misano alloy wheels, which rolled on our R-Line specification test car, you sacrifice comfort for appearance. 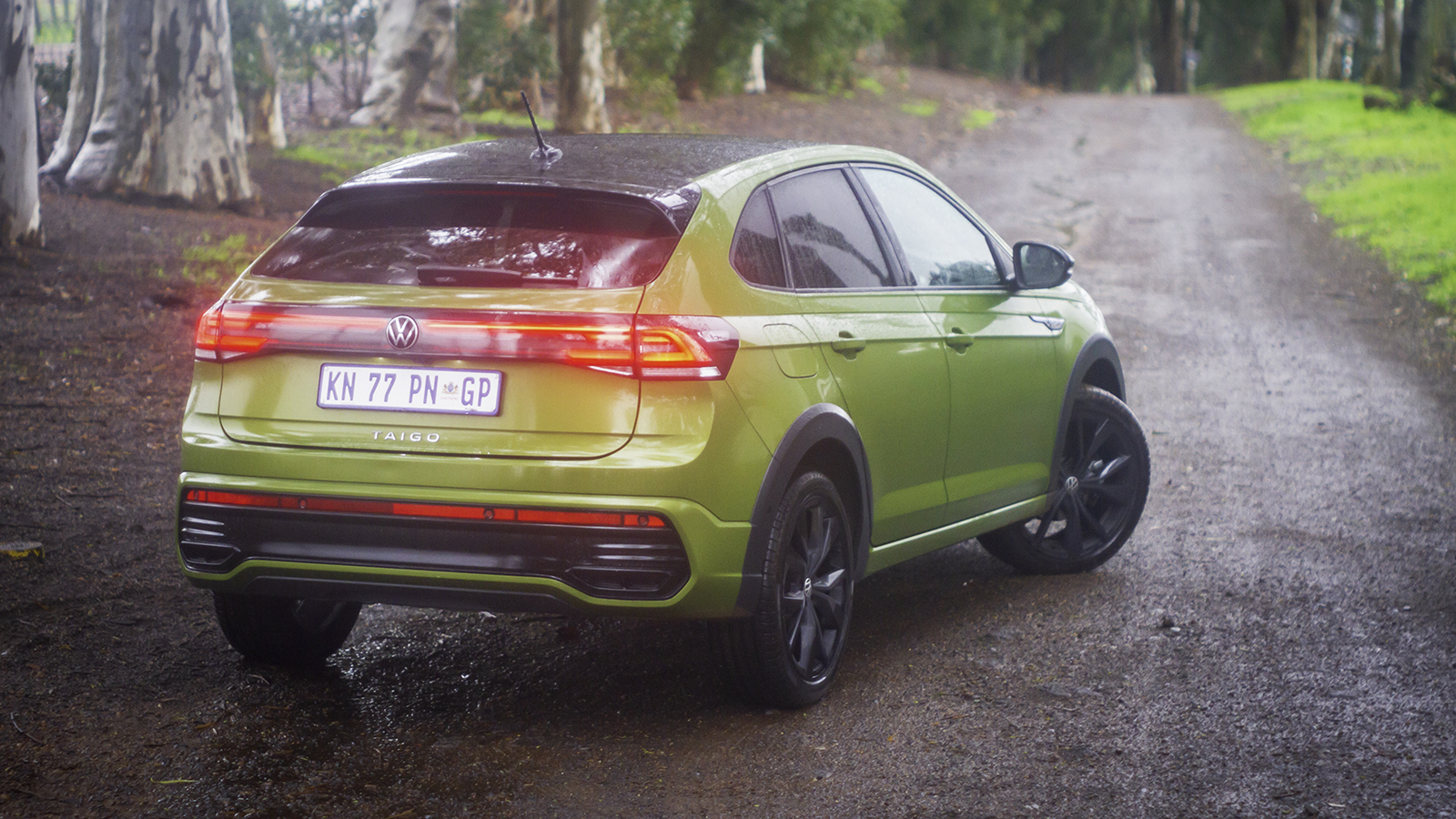 The Taigo 1.0 TSI R-Line’s 1-litre three-cylinder turbopetrol engine is excellently calibrated for its task. Many 1-litre turbocharged engines can feel annoying hyperactive, with extremely aggressive throttle mapping to offset turbo-lag. VW’s engineers have avoided that with the company’s smallest engines.

Assisting the Taigo 1.0 TSI R-Line to deliver a smooth and responsive driving experience, mediating the power delivery of its 1-litre engine, is a 7-speed dual-clutch transmission. The benefit of two clutches is that Taigo’s transmission always has another gear primed for use, whether shifting up or down. And that means immediate gearshifts.

The Taigo 1.0 TSI R-Line is not that light on petrol

Claimed fuel consumption is 5.4l/100km, but that’s merely theoretical. You are always on the boost in a 1-litre turbocharged car, which means reasonably high energy consumption. As one would expect from a small-capacity turbopetrol engine, the real-world fuel consumption was considerably heavier, averaging 9.1/100km, during our test drive,

The Taigo 1.0 TSI R-Line is unquestionably more stylish but ultimately less practical than T-Cross. With VW’s vast dealer network and support, it will appeal to fashion-conscious buyers, a target audience perhaps seeking something akin to a much cheaper version of the Mini Clubman. 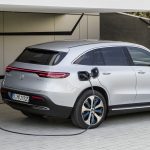