Guerilla advertising is one of my favourite mediums of all time. It all started with staged conversations and fights in cinemas (I can’t quite remember the brands involved), then extended to flash mobs, sponsored treasure hunts and various other staged advertising.

It was how we got interactive before the internet came along. And I miss it!

There was quite a nifty viral-esque response from Nando’s to Cell C’s R160-million Trevor Noah-gate that hit the airwaves recently. And I bet it didn’t cost as much. Tongue-in-cheek rebuttal ads never do. For those who haven’t seen the ad (it’s racked up 90 000+ views on YouTube as of this post going up), here we go:

Shortly after the ad was launched, I received a little delivery, pictured below. Mmmm, mixing real world and viral video. I smacked my lips in anticipation! 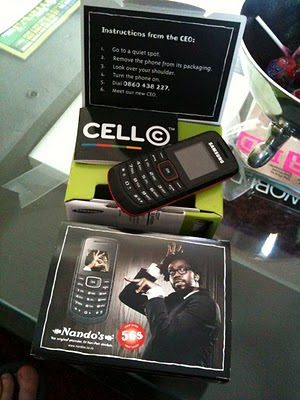 The practice of sending viral promo’s, gifts and review units to “prominent” bloggers is nothing new. It’s a great way to stroke some ego and get the word out in the digital space. It’s amazing how in demand a like like here and a tweet tweet there are. The delivery turned out to be a free Cell C phone with some customised Nando’s package inserts.

I’m not writing this because they sent me a free phone. RICA’ing the bloody thing is going to be a pain in the ass by itself. I’m writing this because I want Nando’s to TAKE IT FURTHER! If anyone has got the talent to bring something completely new to the table, it’s these guys. Free phones, a USB stick with the ad material on it and a cutesy call to a pre-recorded Kagiso message is… well, cutesy.

I’m not sure how many phones were delivered, but let’s imagine a couple hundred. Do you, gentle reader, have any idea how powerful that is? Having a dedicated voice, text, USSD communications device that you have placed in someone’s hands!? This could be the most personal viral campaign South Africa has ever seen, enticing these bloggers and other media sorts to post and tweet like crazy… if that device was used over time to roll out a story-based interactive campaign.

There was a computer game back in 2003 called In Memoriam (read the Wikipedia article here, visit the game website here) — which, although a little buggy, absolutely captured my imagination. You have to remember this was pre-social media, so personalised interactivity on the web was still pretty new.

In Memoriam was a serial killer game that required registration on the internet – and then used those details to send you emails at various points, from game characters and even the serial killer himself. You progressed through the game by interacting with these emails and doing research on the internet, through a mixture of real world sites and certain “planted” sites on bought domains. It was revolutionary, and awesome, and Nando’s should go check it out.

Imagine how exciting it would be if that chicken phone they sent me suddenly rang. And using a mixture of pre-recorded messages and texts, they led me on a wild chicken chase across Joburg – trying out their product, living their brand, laughing at their humour.

I’m waiting for it to ring.