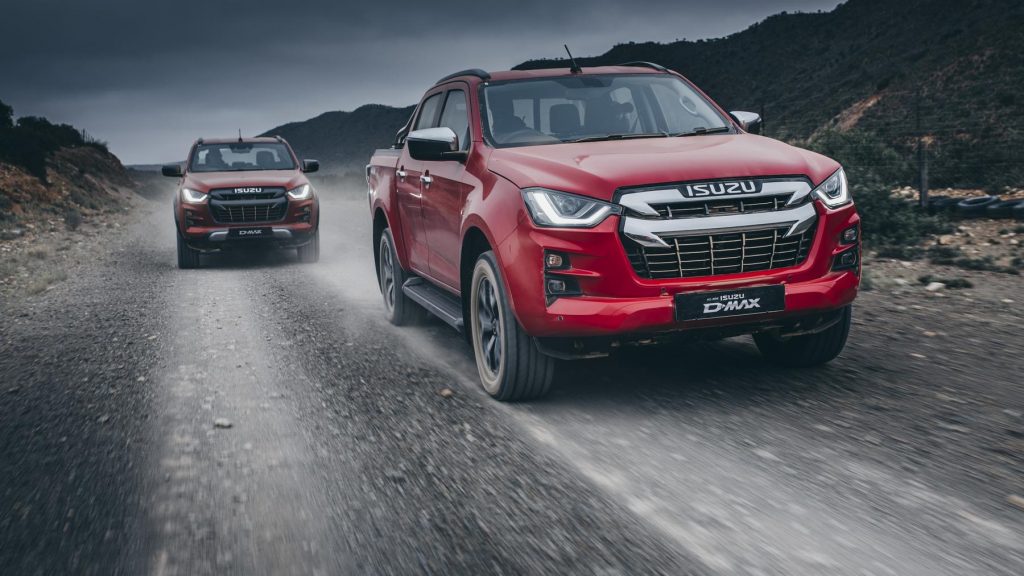 It has been a frustrating time for followers of the Japanese bakkie brand. Despite Isuzu owning a legacy assembly facility in Gqeberha, the local introduction of new D-Max has been significantly delayed.

In many global markets, the new D-Max has been available for nearly two years. Annoying delays aside, this new D-Max trades on a strong product heritage in South Africa.

Isuzu can rightfully claim to be the country’s quintessential bakkie brand. It does not market any passenger cars. The brand’s entire focus, from assembly to dealers, is geared toward bakkies. And that creates a meaningful sense of expectation. 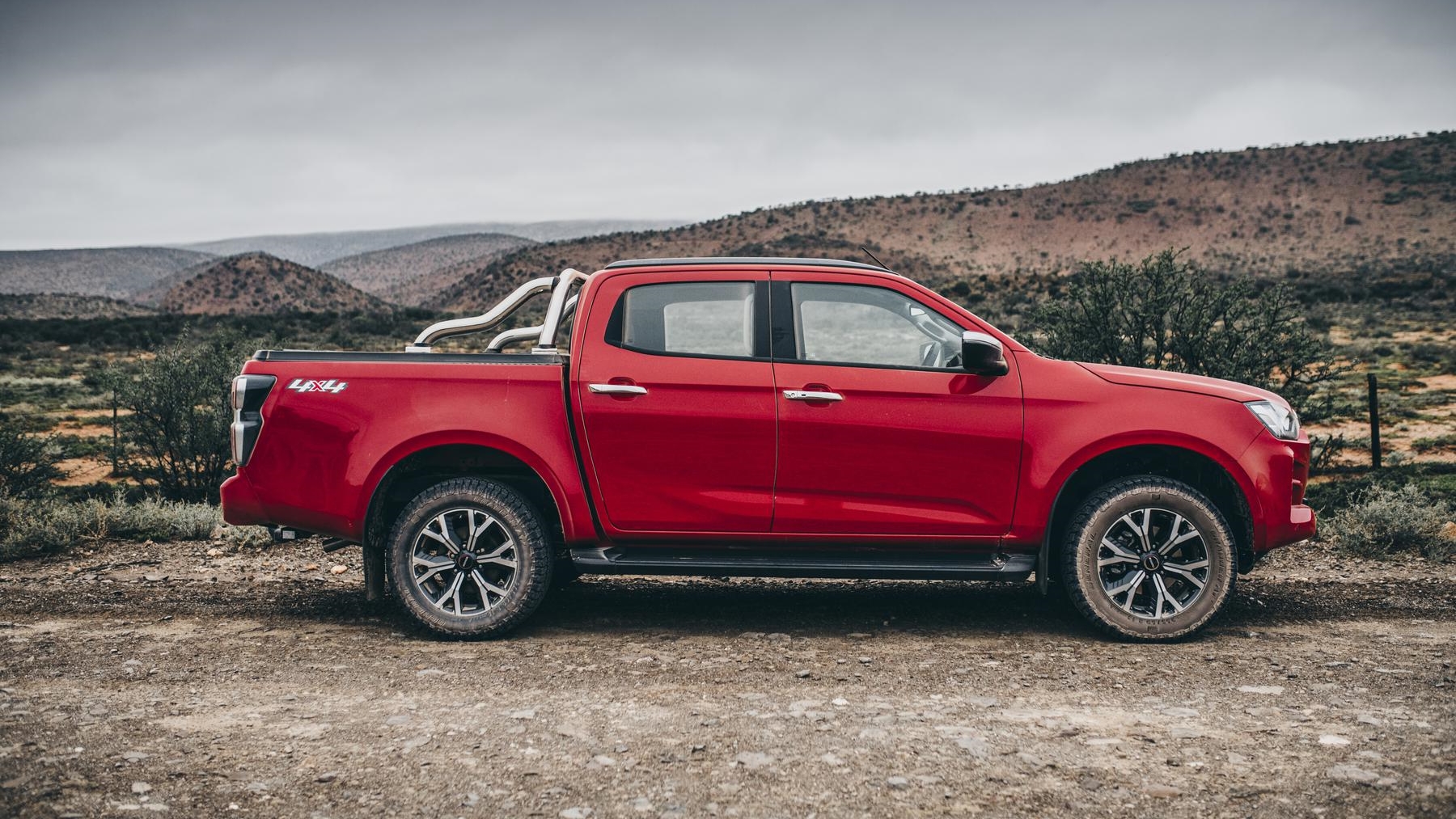 As Isuzu customers have come to expect, the model range is large and diverse, with 23 derivatives. The buy-in point is R401 700, for a base specification single-cab and peaks at R814 700, for the most lavishly equipped double-cab 4×4 version.

Isuzu is the world’s biggest manufacturer and supplier of diesel engines. And with its new bakkie range, one of Isuzu’s most cherished engines has been retired – in favour of an exciting new option.

The legendary Isuzu 2.5-litre diesel is no more. Isuzu has decided to replace it with the company’s much smaller 1.9-litre turbodiesel. This engine been available in Europe for many years but was never considered appropriate for the local market.

Boosting 110kW and 350Nm, with the promise of much lower fuel consumption compared to the 2.5-litre, D-Max’s 1.9 Ddi engine should appeal to value-seeking bakkie buyers. 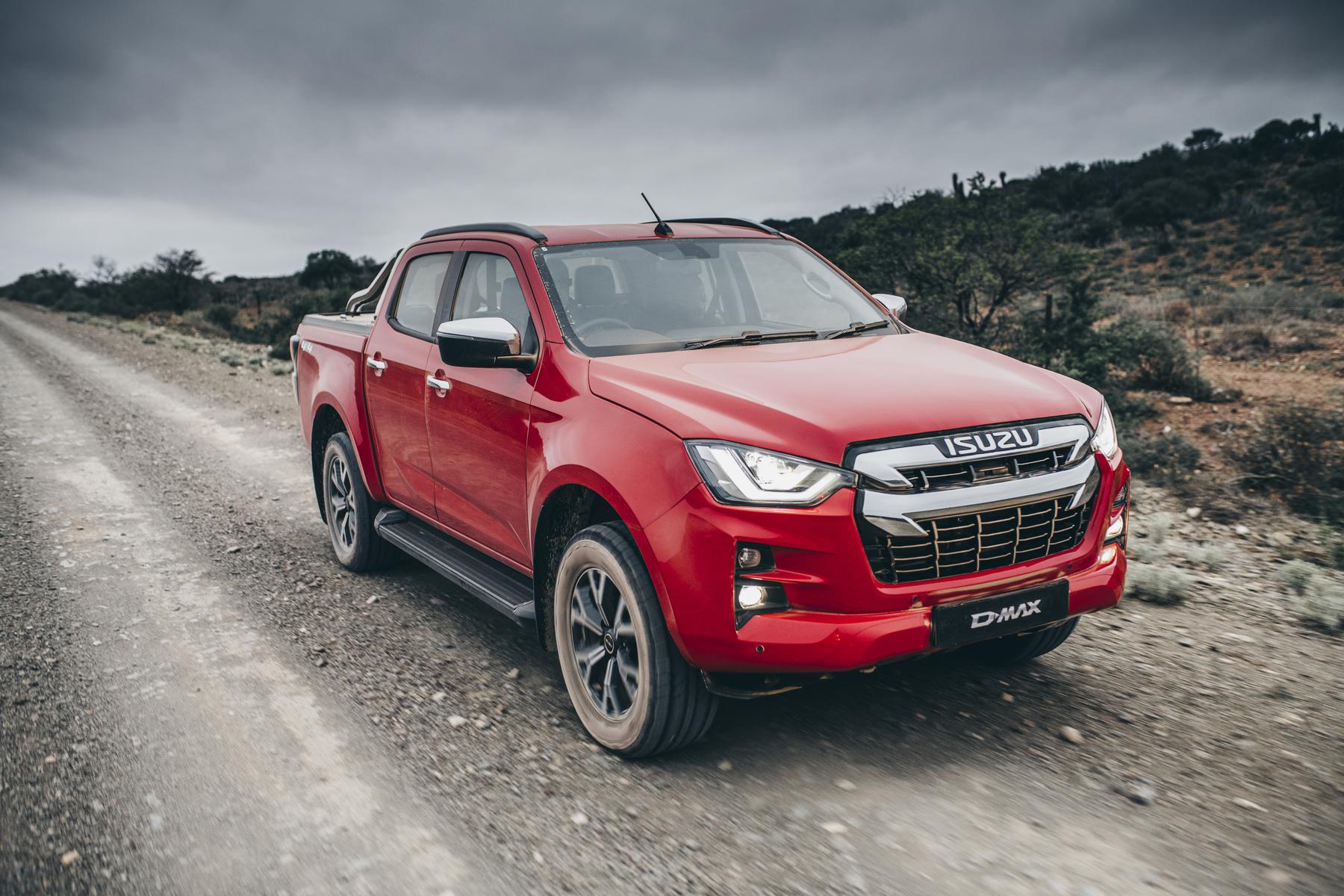 Isuzu’s 3-litre turbodiesel continues as the lead powertrain offering, but it has gained a touch more power in this new range.

Engine outputs of 140kW and 450Nm can’t match the most potent Ford Ranger or Toyota Hilux turbodiesel engines, but the 3-litre diesel having 10kW more power will be appreciated by legacy Isuzu double-cab customers.

Gearbox options are either a six-speed manual or automatic. 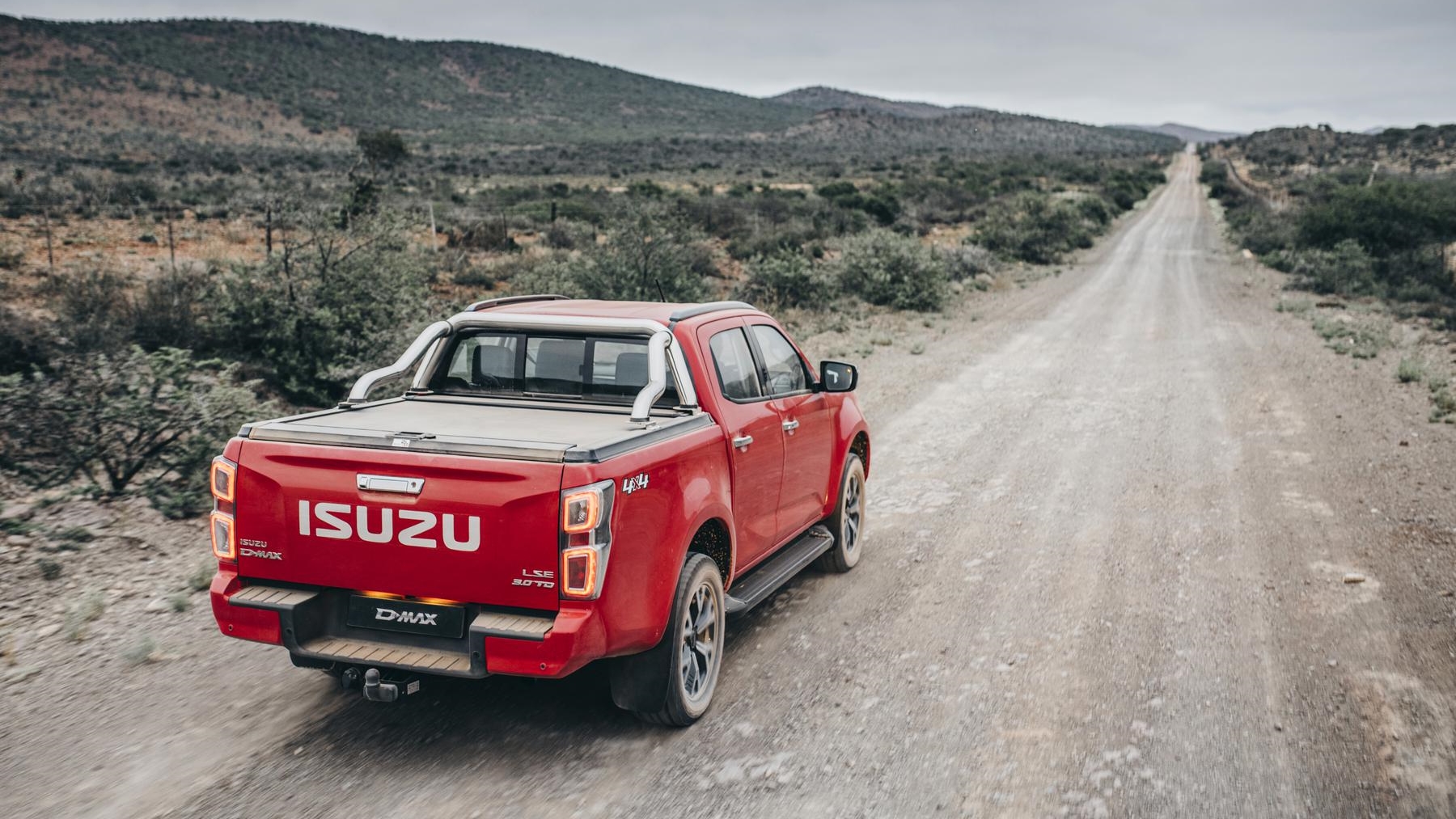 The new D-Max has a 30mm longer wheelbase than its predecessor. If you remember the formula from first-year engineering class – any increase in wheelbase equals greater vehicle tracking stability. That’s a good thing – and the lengthier wheelbase also creates a more spacious cabin. 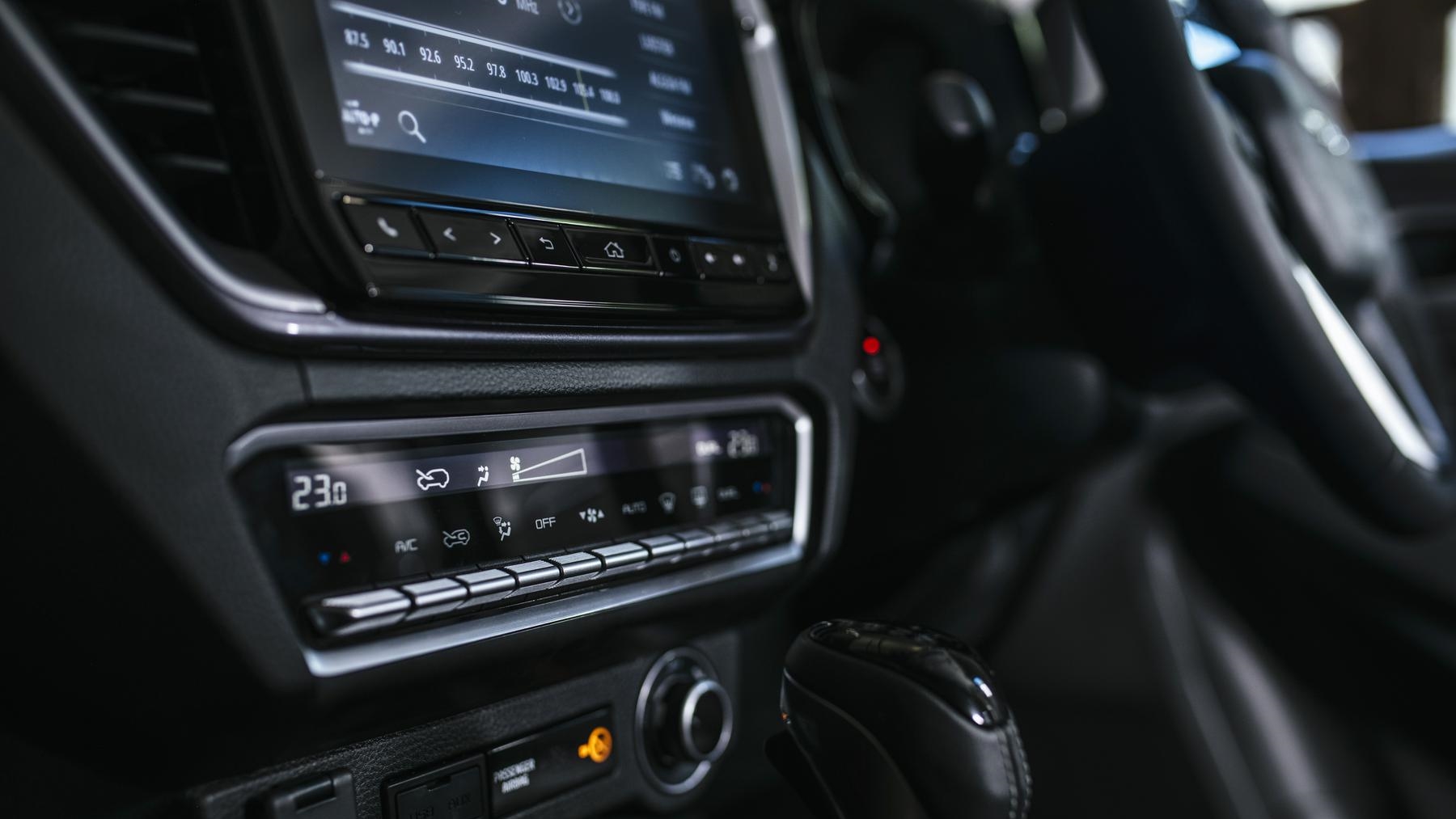 Isuzu’s engineers have also reduced the rear-suspension’s stack of leaf springs from five to three blades at each wheel. That saves some weight and should deliver better ride quality when nothing is being carried in the loadbox.

The suspension bump stops have 30mm more travel too, before reaching their contact points. A longer wheelbase and reconfigured bump stops should result in a softer ride when rolling over very poor road surfaces.

Isolating passengers from the jarring influence of South Africa’s worst gravel roads, has always been an Isuzu vehicle characteristic. And with its smartly configured suspension, the new bakkie range should be true to this ride quality heritage.

Many bakkie brands offer huge alloy wheel options in the local market. But experience bakkie owners know that a smaller wheel, rolling high-volume tyres, are best. D-Max’s offers a 265/60/18 tyre on select variants, which should deliver excellent bump absorption on gravel roads. This tyre size also has a generous reserve of air volume, when you need to deflate to increase traction across a challenging section of dune driving. 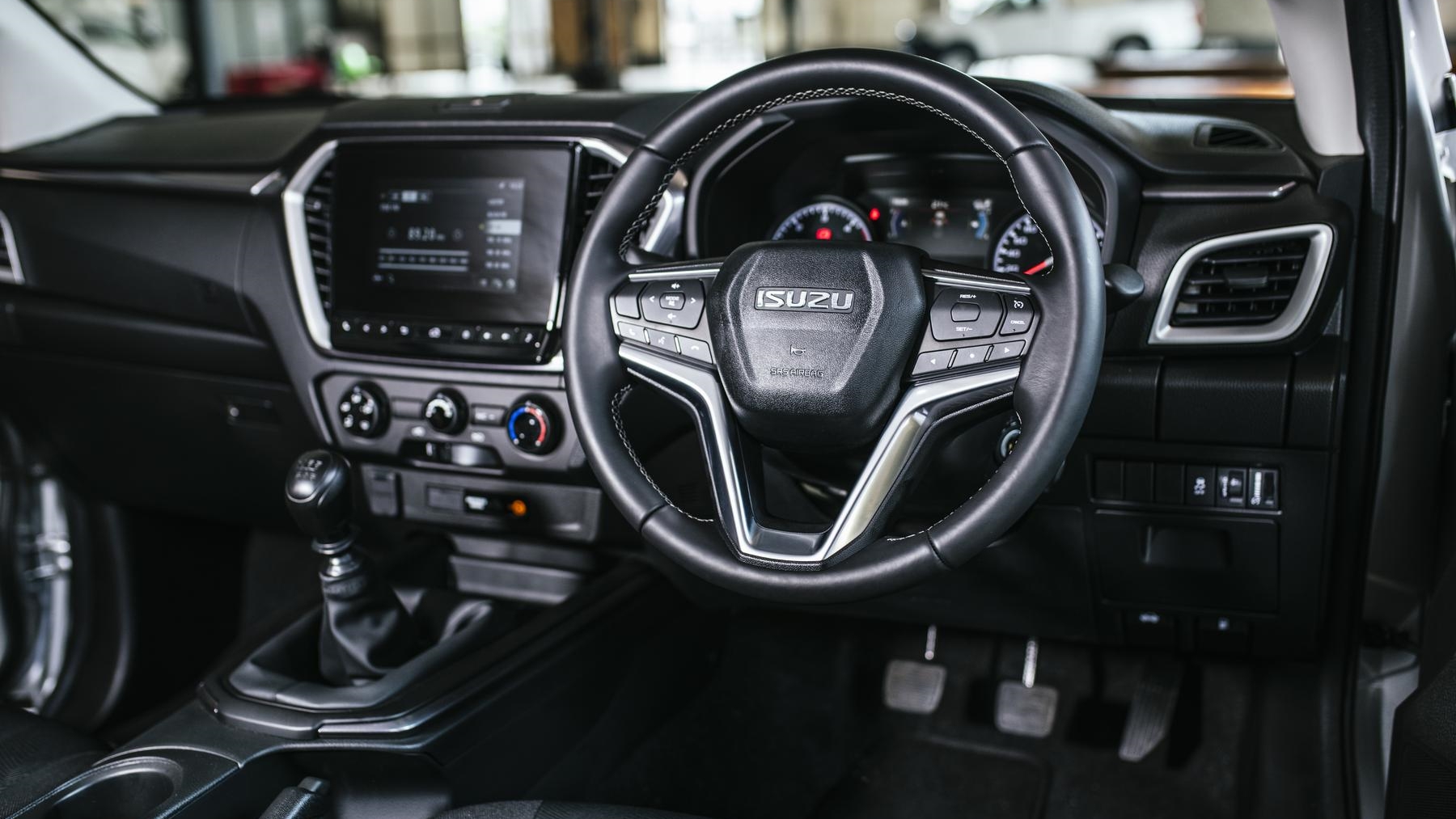 Lots of tech in the V-Cross trim

A modernisation of the D-Max cabin has brought better switchgear and a large infotainment screen. Showing awareness of the difference between bakkie and SUV customers, interior architects at Isuzu have retained many conventional buttons and control tabs for the key infotainment and HVAC controls.

The reconfigured Isuzu bakkie range has the V-Cross version as its halo badge. Bakkies in this specification feature eight-way power-adjustable leather seats and a broad array of safety systems.

Autonomous emergency braking, adaptive cruise control and rear cross-traffic alert are all present to help reduce the driving burden and prevent collisions. The lead D-Max double-cabs have up to eight cabin airbags too, protecting occupants in the eventuality of a crash.

With its bakkie range, few vehicles have the depth of brand equity that Isuzu enjoys. Despite making South African customers wait way too long, the new D-Max range will reinforce Isuzu’s position as a favoured ‘alternative’ choice for most local buyers – who aren’t keen on Ford’s Ranger or Toyota’s Hilux. 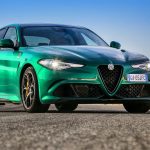