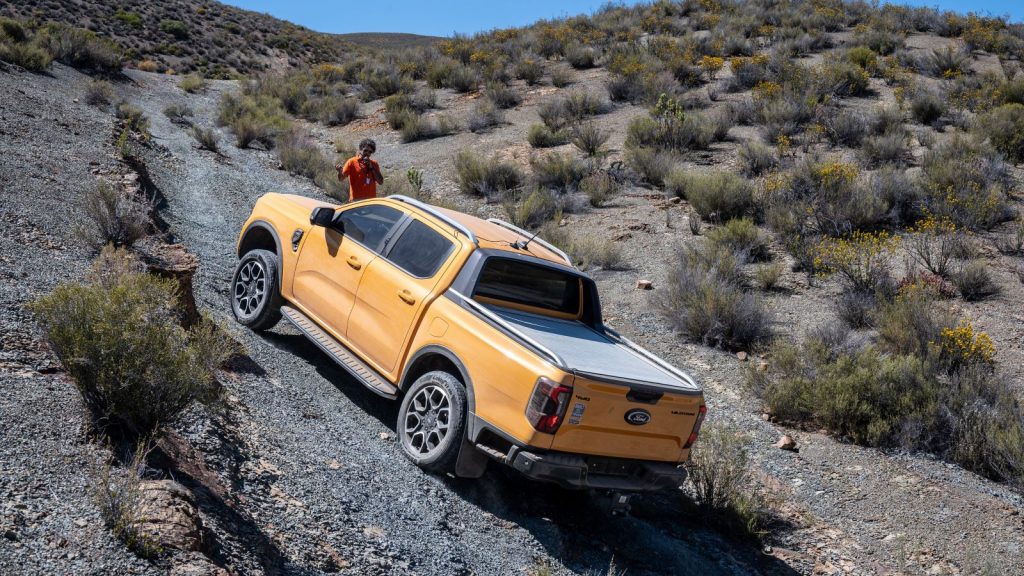 Ranger V6 double-cab promises much. But does it deliver? We drove the new Ford bakkie over some very steep Western Cape terrain, to test it.

After nearly two years of teasing and waiting, Ford’s Ranger double-cab is finally on sale in South Africa. It is one of the most deliberate design projects in Ford’s history, starting in 2016 and only coming to market six years later. An unusually long in modern automotive design cadence.

By far the most important Ford to launch in a decade, the new Ranger will drive most of Ford’s revenue in the local market. But how competitively is it priced? And does all the sophisticated technology translate into a truly enhanced driving experience? 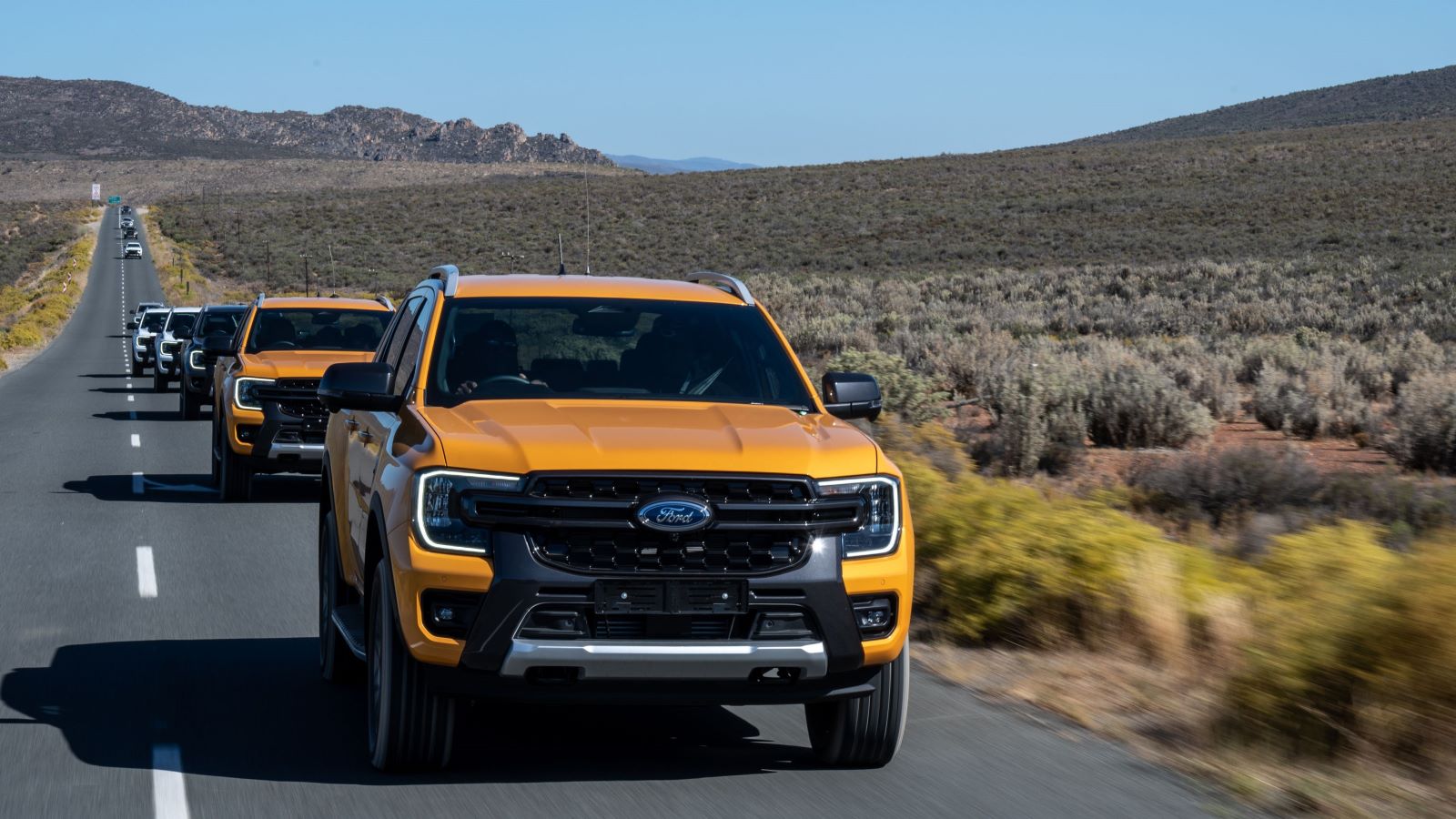 Big infotainment screens for all Rangers

Ford has been an innovator in the bakkie infotainment space. The T6 Ranger offered some of the best Smartphone synching of any double-cab. This new bakkie continues the strong Ford infotainment theme with its SYNC 4 system.

Interfacing is excellent with generously sized portrait orientation screens across the range. Even the most affordable Ranger, which rolls steel wheels, features impressive Smartphone integration and a 10.1-inch touchscreen. Quite a contrast for a bakkie with vinyl seats that will service the agriculture, mining, construction and survey industries.

On Ford’s premium Ranger models, the XLT and Wildtrak, the infotainment offering is even more impressive with 12-inch screens. You can also use the FordPass App to lock, unlock, pre-cool the cabin and control the Ranger’s 360-degree surround vehicle lighting. That latter feature is terrifically useful if you are camping. 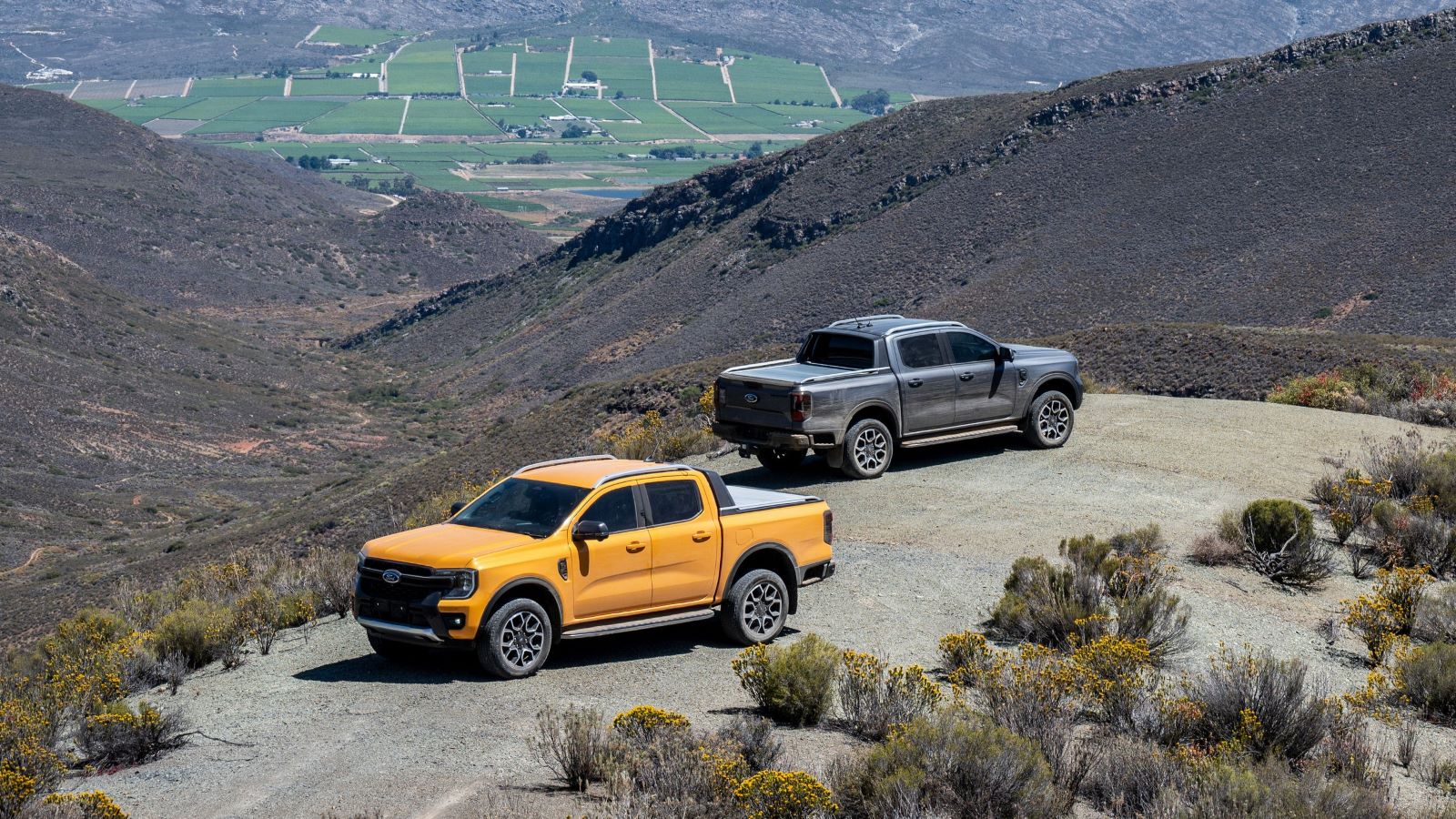 All the outdoor UX

The double-cab bakkie market is incredibly competitive, with owners demanding ruggedness and sophistication. Ranger double-cab is expected to be both family car and an adventure vehicle.

Ford’s attention to ergonomics and UX are deeply impressive. Slide-proof storage trays are positioned around the cabin, including above the cubby hold. The cabin fabrics are comfortable and very dust and grit stain resistant, thanks to Ford’s sourcing of the latest advanced outdoor industry fabrics.

Although the Ranger’s purpose will primarily be as a leisure bakkie and family vehicle in South Africa, it’s utility has not been unevolved. The loadbox has grown and can now accommodate a full-size pallet. And there are clever grooves moulded into the loadbox surfacing, which allows for DIY dividers.

Imagine you want to divide your new Ranger’s loadbox into compartments, or prevent smaller items from rolling around. All you need are some lightweight sections of timber. Slide them into those loadbox grooves and you create dividers.

You won’t struggle to find camping items or preparing food in the Ranger loadbox, even at night. Ford’s designers have repositioned the Ranger’s loadbox lighting to create an even distribution of illumination at night. Without fewer shadow areas. 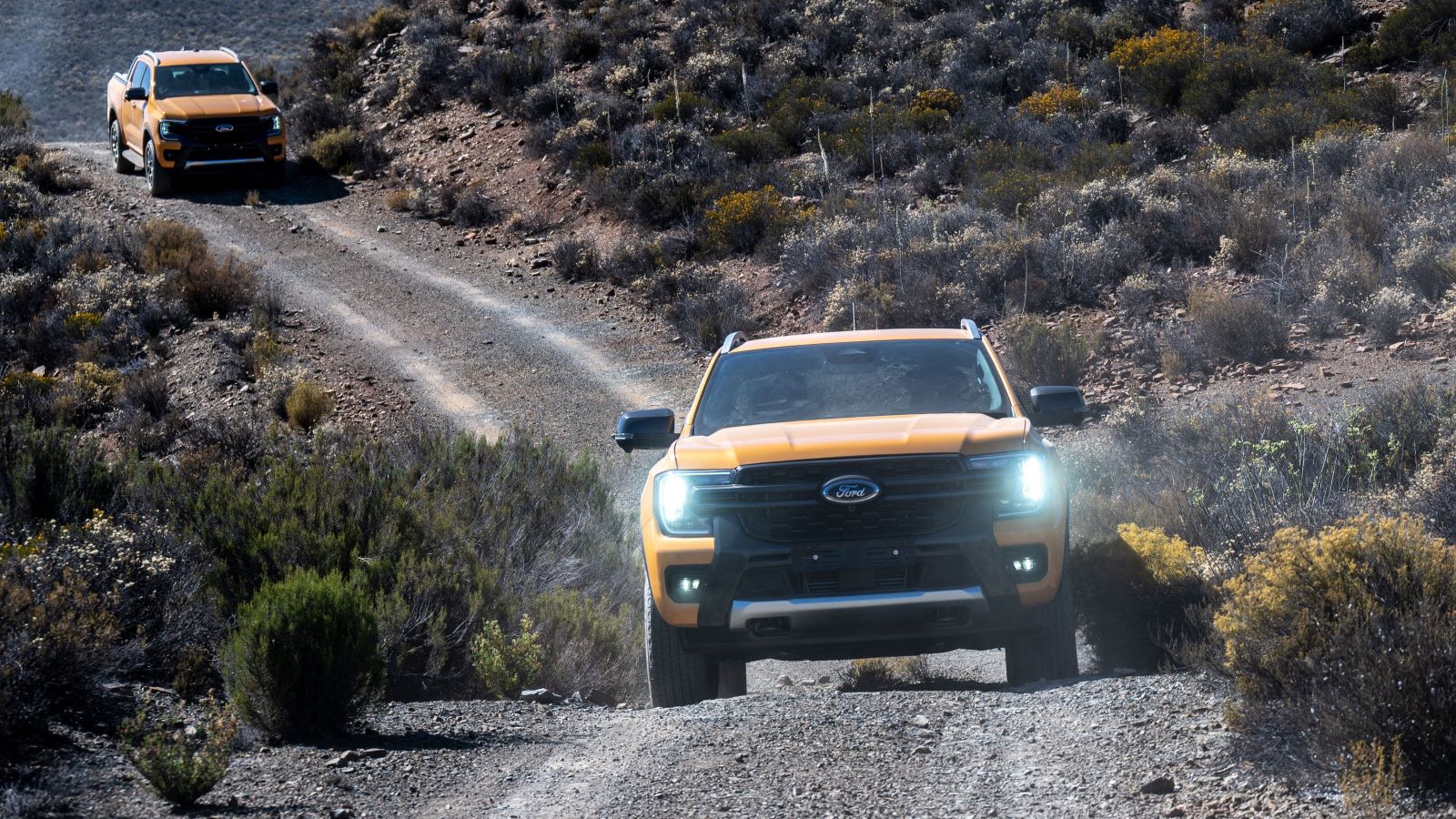 Ford’s F-150 bakkie is the company’s most important and profitable vehicle. Across the globe, all Ford followers covet it. Including South Africans.

The new Ranger is a true mini-F-150 regarding its road presence and design harmony. Understated but with unquestionable presence, thanks to its 50mm wider tracking width and those front wheels also being moved 50mm forward.

But what about the driving experience? By far Ford’s most important Ranger derivative is the 3-litre V6 diesel 4X4. This becomes the most powerful Ford bakkie to ever go on sale in South Africa. With 184kW and 600Nm, it offers excellent highway cruising and towing ability. 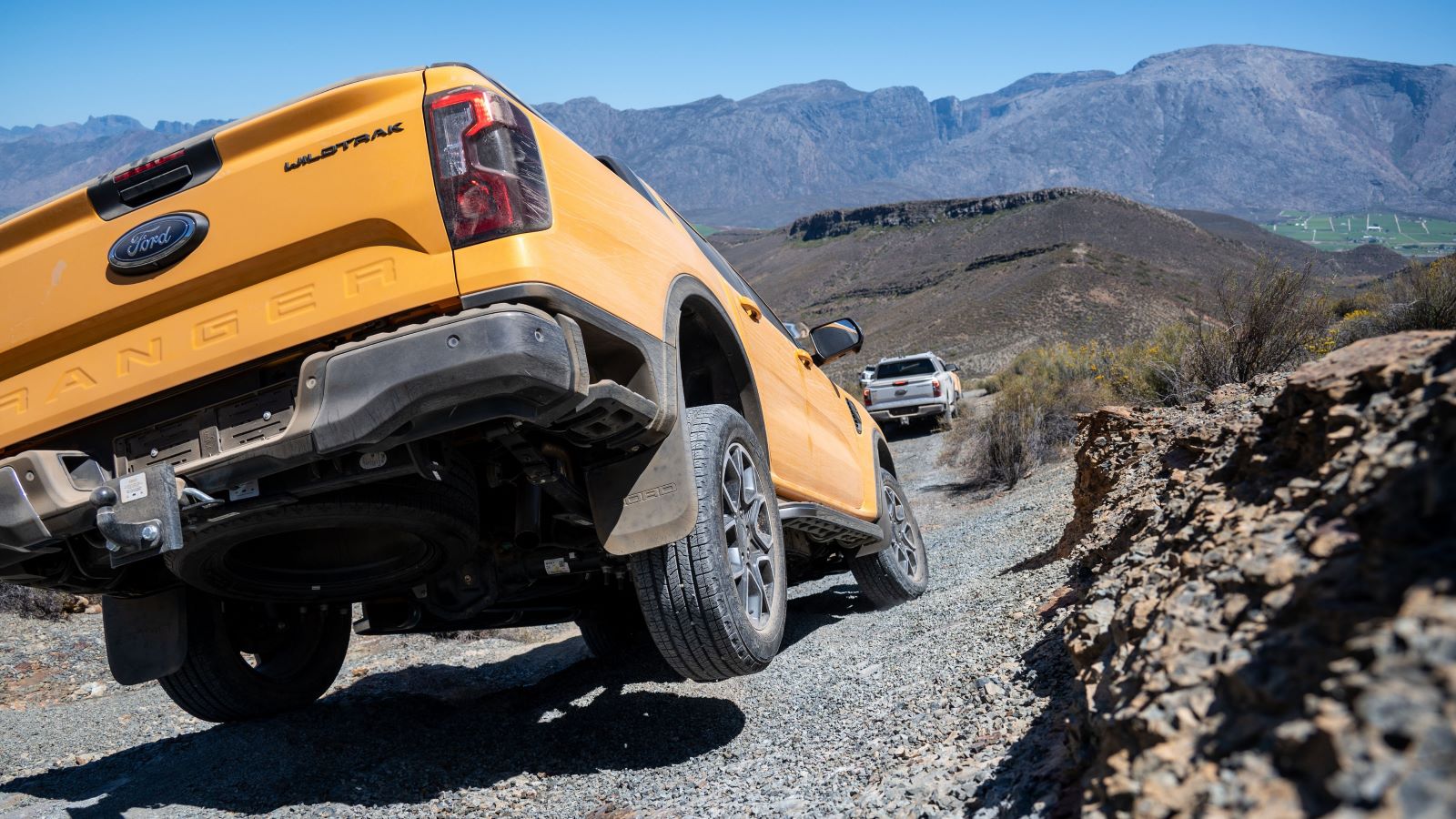 How good is Ranger V6 to drive?

The Ranger is big bakkie, but it doesn’t trigger anxiety. Controls are light and tactile, allowing you to confidently position it on the road. We did an extensive off-road testing route with the new Ranger V6. Its ability to conquer the steepest, most technical terrain effortlessly, was very impressive.

Ford updated the Ranger transfer case with its V6 version. It offers the extreme gradient climbing ability of low-range and a cleverly configured high-range ratio. Unlike most other 4×4 bakkie transfer cases, the Ranger 3-litre V6 has a 60/40 locking ratio between the axles.

Many transfer cases don’t have a locked ratio in high-range. That means that if you lose traction on any of the four wheels, there is drive loss on that entire axle. This can be an issue in dune driving, where higher speeds are required. And low-range is too limited in its spectrum. With the Ranger 3-litre V6’s high-range locking in a 60/40 ratio, you will retain drive to both axles, even if you lift one wheel, when negotiating off-road terrain at speed. 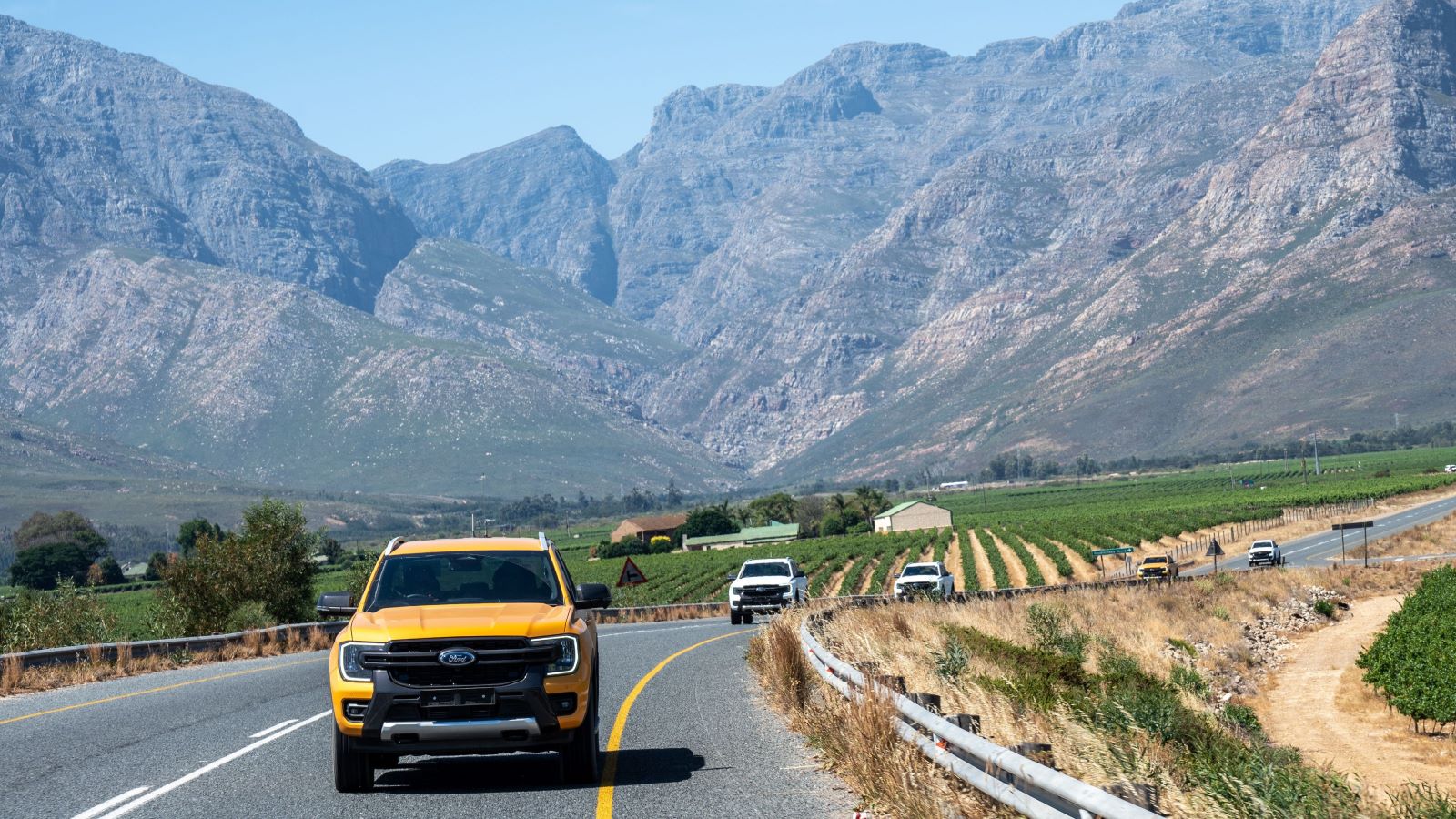 Ranger V6 is comfier on-road, too

Beyond the impressive off-road ability, new Ranger is remarkably refined to drive. It’s a lot more passenger car than bakkie. Without sacrificing that 1000kg carrying capacity in the loadbox.

One of the very best design features of new Ranger isn’t trick infotainment or a potent engine. But something so elegant and useful. And that is the new Ranger’s box-step. A moulded step-space, which you can use to easily climb up and into the loadbox, without risk of slippage or injury. 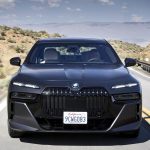